Kearny PD – “Upon shining his flashlight into the car, Officer Gontarczuk saw the backseat passenger looking expectantly over his left shoulder while his right hand reached for the loaded revolver sitting by his side.”

Kearny Police took to their Facebook page to give their citizens a glimpse of how NJ Bail Reform is working in their town – detailing the arrest of three individuals on drugs and weapons charges.

The chilling story recounts an overnight shift traffic stop in which one of the arrested “reached for the loaded revolver” during the officers approach to the vehicle.

Three individuals were arrested after officers found drugs packaged for sale, the loaded revolver, and an open bottle of alcohol.  On Monday…all three were released on a “pinky promise” thanks to NJ Bail Reform.

Allow us to tell you a story of two young police officers working the overnight shift in South Kearny’s 2nd Precinct.

Officers Mike Gontarczuk and Sean Podolski were patrolling Route 1&9 on Saturday night when a vehicle sped past them at a high rate of speed. Adding insult to injury, the speeding vehicle’s taillights did not work properly. The officers were able to catch up to the speeding car just over the bridge into Jersey City where they pulled it over.

While Officer Podolski called in the stop on the police car radio, Officer Gontarczuk quietly walked up to the passenger side of the stopped car. Choosing this quiet passenger side approach may be the luckiest decision the young patrolman has made in his short career.

Officer Gontarczuk noticed three men in the car all looking over their left shoulders. The men were expecting an officer to approach from the driver’s side. They hadn’t yet realized the second officer had reached the passenger side window. Upon shining his flashlight into the car, Officer Gontarczuk saw the backseat passenger looking expectantly over his left shoulder while his right hand reached for the loaded revolver sitting by his side.

Luckily, this story ended without a shot being fired. After “getting the drop on them,” the two officers were able to remove the men from the car at gunpoint and arrest them absent any violence. The officers also recovered the drugs the men had packaged as if for sale and the open bottle of liquor that accompanied them on their drive.

Unluckily for the rest of us, KPD was notified that the three men were released Monday at their first appearances at Criminal Justice Reform Court. Is speeding through Kearny with broken taillights, an open bottle of booze, drugs packaged for sale, and one’s hand on a loaded revolver during a traffic stop proof that men are a danger to the community? That’s not for us to judge, but consider our minds boggled.

All we can say is, here’s to a job well-done by Officers Gontarczuk and Podolski! Thank you for standing ready so that others may sleep peaceably in their beds at night. 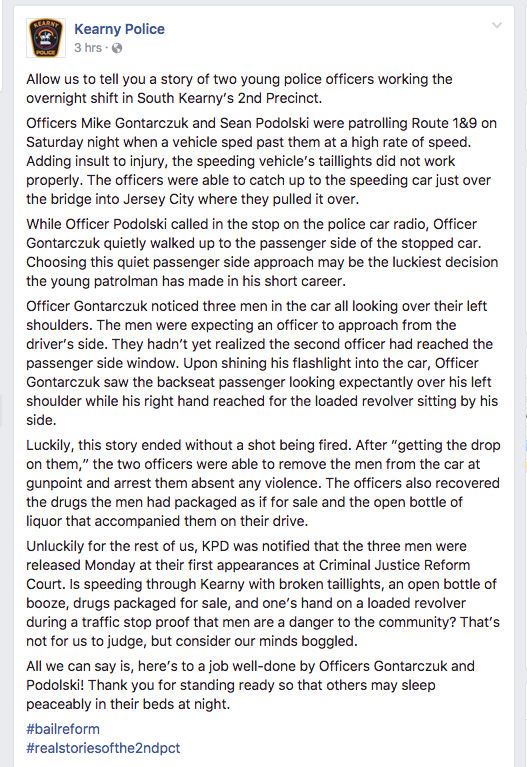 New Jersey’s main stream media seems to be on a mission lately – publishing “selective” and well placed articles praising bail reform. We may not be able to match the power of their outreach, but we will continue to show you the other side of bail reform – the one you don’t hear much about.

Brick Township, like many New Jersey towns have recently, will vote on a resolution Tuesday to change the new bail reform laws – in part because of the tremendous costs associated with complying. Under the […]

The revolving door of unaccountable releases continue with Angel Acevedo…released in January and again in March for robbery, aggravated assault with a deadly weapon, and burglary…FREE TO GO under NJ Bail Reform. Angel Acevedo, 24, […]

A month long investigation by the Phillipsburg Police Department and Warren County Prosecutors Office led to the arrest of six individuals…all released on a SUMMONS and FREE TO GO thanks to NJ Bail Reform. Charges […]