Four arrested were released on the spot…including a New York man.  Darnell Miller, the main suspect in the investigation was released 2 days later on Mar 8, 2017. 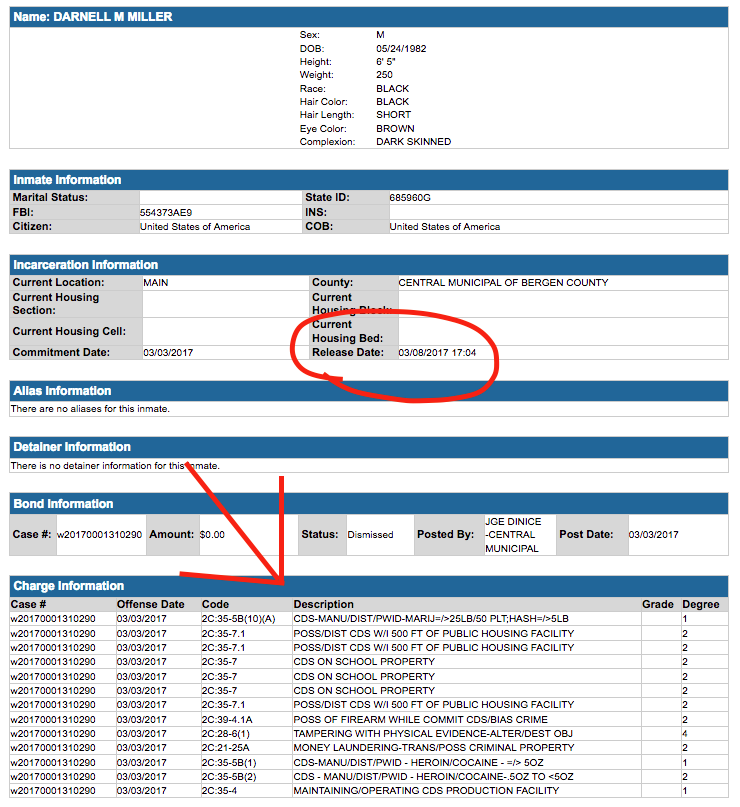 A Bergen County man is accused of running a drug mill after police found 3 kilograms of cocaine, 30 pounds of marijuana and more than $180,000 in a North Jersey home recently, authorities said.

An investigation revealed that Allen Statam, 55, of Miramar, Fla. and and Juan Norzagaray, 33, of Tuscon, Ariz., were in possession of more than $68,000 which police “believed to be derived from criminal activity,” Gerwal said. The men were arrested on money laundering charges.

Members of the Bergen County Prosecutor’s Office were advised of the arrests. From there, the prosecutor’s office coordinated with the Hackensack and Edgewater Police departments and the U.S. Drug Enforcement Agency, who responded to an Edgewater residence where narcotics and more money were suspected to be, Gerwal said.

Authorities found Gary Mertil outside the home in possession of marijuana, Gerwal said. He was arrested and, based on “further intelligence,” authorities obtained a search warrant for the residence, the prosecutor said.

Authorities executed the search warrant and found Darnell Miller, 34, of Edgewater, inside, along with a “drug mill” on the lower level with about three kilograms of cocaine, 30 pounds of marijuana, one ounce of heroin, a kilogram press machine, and nearly $182,000 in cash, Gerwal said.

Mertil, 32, of West New York, was charged with possession of marijuana in an amount less than 50 grams.

Statam, Norzagaray and Mertil were released on their own recognizance pending a first appearance in Bergen County Central Judicial Processing Court.

Christopher Ortiz, 29, of West New York, was charged with beating a woman by slapping, punching, and biting her – resulting in a fractured rib and other facial pain – now FREE TO GO thanks […]

Jamal Buddington, 22, of Jersey City, who only two months ago was sentenced to five years probation, was arrested Mar 17  after walking down the street with a rifle in his pants…now FREE TO GO […]