Pretrial Justice Institute and University of Pretrial: How Getting a Degree Requires Only a Checkbook from the Only University with No Professors.

No, this is not a late April Fools joke…this is the University of Pretrial sponsored by yet another misnomer – The Pretrial Justice Institute.

There has been a lot of discussion about bail reform of late.  We always think it is important to ask who is behind this movement to eliminate all financial conditions of bail in this country in exchange for a socially engineered system of justice never-never land of the new criminal justice system.

So, we thought this time we would focus in on one key player in the bail reform debate: the Pretrial Justice Institute and the University of Pretrial.

Typically, a research institute starts with a group of fellows—well-pedigreed and learned people who specialize in conducting original research to help assist the mission of the institute.  In the case of the Pretrial Justice Institute, there is not a single fellow that works over there.  In fact, there is only one PhD on staff who holds a PhD in Chemistry from Colorado State University and was a renewable energy scientist prior to finding her passion of “innovation at the junctures of science and law.”

The only other identifiable doctoral degree among the staff is an employee who graduated in 2015 from Cornell Law School with a juris doctorate, who boasts such extensive experience as being a “judiciary intern” and “research assistant.”  In short, there is no one with any level doctoral training relevant to the field down at the Pretrial Justice Institute who has published a single article in a single peer-reviewed journal.

According to Wikipedia, the functions of a ninja are as follows:

The functions of the ninja included espionage, sabotage, infiltration, assassination and guerrilla warfare. Their covert methods of waging irregular warfare were deemed dishonorable and beneath the samurai, who observed strict rules about honor and combat.

Thus, not only does Pretrial Justice Institute lack any credible academic fellows, their Executive Director promotes and touts the culture of the ninja, of dishonorable espionage, sabotage, and guerrilla warfare.

To add insult to injury, the Pretrial Justice Institute created the University of Pretrial to indoctrinate people around the country into their smart way of thinking.

The problem?  There are no professors working down at the University.  There are no students.  There no admissions office.  No bursar’s office.  No “Old Main” hall.  No cafeterias with people wearing hair-nets and slopping food onto a tray with an ice-cream scoop.  Oh, and no accreditation of any kind of this University.  A University by name only, accredited by those unqualified to do so, with an open agenda designed to destroy criminal accountability – Ninja style.

The good news is that getting a degree as a Pretrial Ninja or other related field down at the University of Pretrial is pretty easy—you don’t have to attend any classes or anything.  You just have to break out your checkbook to help pay the 46% of management expenses required to end money bail, and poof…. You are the “Top Ninja.”  (More on the “University” balance sheet here) 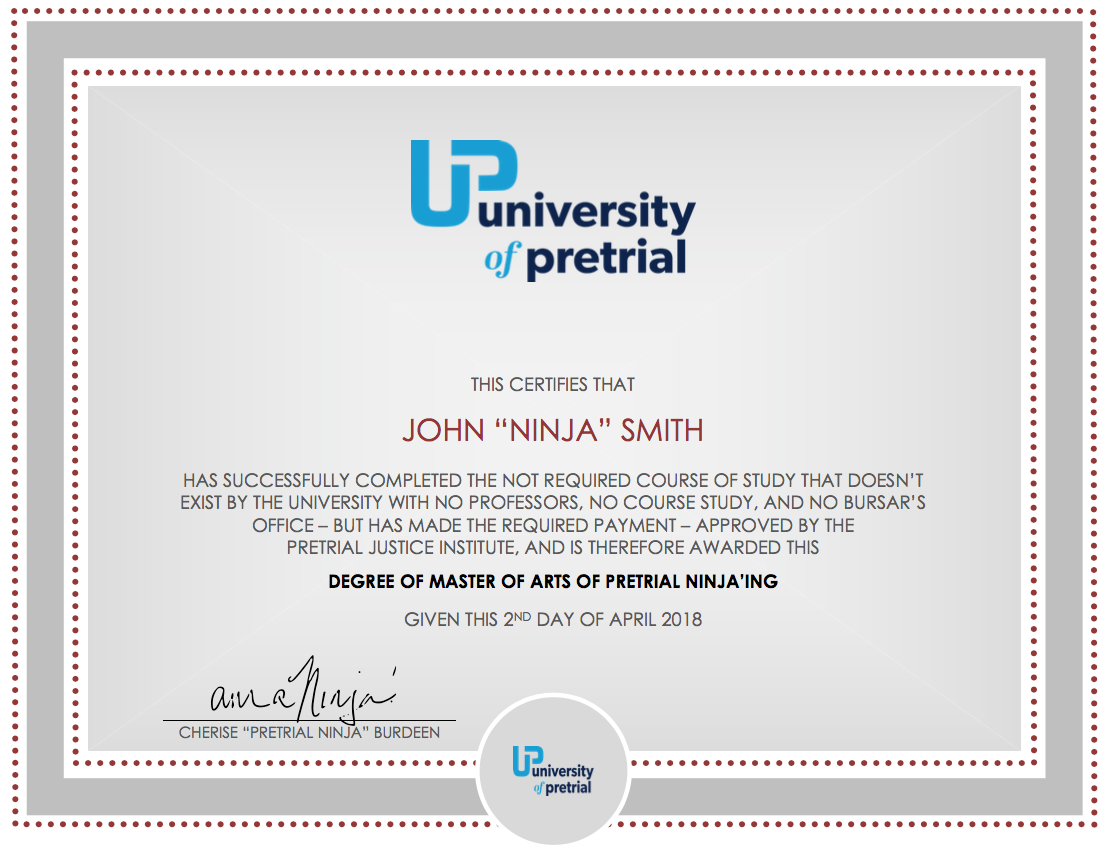 Of course, the mascot of the University of Pretrial are the “UPrisers.”  Their motto? “We are, in short, unmessable with.”

Here is a schedule of degrees and costs that you can earn as an “UPriser”:

(More on Admissions to the University and “UpRisers” Here)

Unfortunately, no data on the number of degrees issued is available, nor are there any data on the employment statistics of each person who graduated the “University,”, say with a “Ninja Angel degree.”  It might be that a mere “Change Agent” degree could qualify someone to run for public office!

So far as we can tell, the University of Pretrial has issued no fake honorary degrees, however, we would offer a list of potential candidates…

As the bail reform debate continues, it might be time for policy makers to understand that fake institutes and universities should not be taken at face value as true academic institutions.  In the case of the Pretrial Justice Institute and the University of Pretrial, they all but admit that not only are they not true Institutes and Universities that conduct research or offer degrees, they instead train the Ninja culture of espionage and guerrilla war.  And frankly, even at that, it would probably be cheaper to avoid the Pretrial Justice Institute and University of Pretrial and go with a do-it-yourself course:  How to Train to be a Ninja Easily

There are serious cracks in the guerrilla war and espionage strategy—when it comes to time for policy-makers to look at the work of the Pretrial Justice Institute, they are instead left thinking, where is the beef?  In fact, since New Mexico changed its constitution in 2016, no state legislature has made any substantial change in their system the way the ninjas wanted them to.