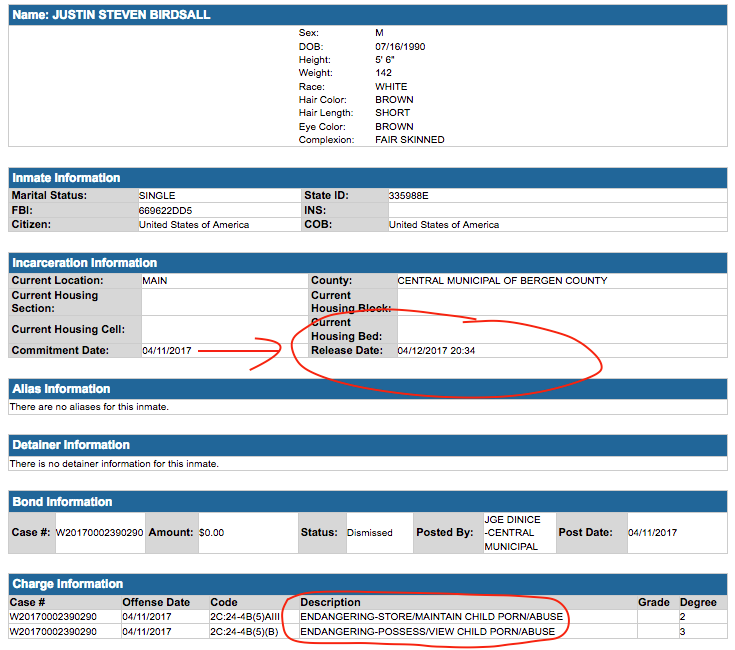 Birdsall, the prosecutor said, “was using the Internet to distribute and acquire images and videos of child pornography, as well as utilizing a file-sharing program on his computer hard drive [that] made the images and videos readily available for others to download.”

He was charged with child endangerment by possessing and distributing “images depicting children engaged in prohibited sexual acts,” Grewal said.

Birdsall admitted in federal court in Newark in March 2011 that he had more than 600 images of child pornography at his parents home, where he lived with three younger siblings (ages 17, 13, and 8), after the FBI arrested him two years earlier.

After a three-week investigation, Raymond Petway, 33, of Jersey City, was arrested with 575 bags of heroin and $3,000 in cash – charged with drug distribution in a school zone – now FREE TO GO […]

Makia Reed, 22, and Tony Crowe, 24, were arrested after the duo tried to sell 1,000 bags of heroin to an undercover cop.  Both have since been released thanks to NJ Bail Reform. ZERO Accountability […]

Igor Khavulya, 35, of Philadelphia, was charged with possession and distribution of crystal methamphetamine, distribution within 1000 feet of a school, possession of drug paraphernalia, and driving on a suspended license. Khavulya had to […]