A North Arlington man is now FREE TO GO under NJ Bail Reform after being charged with sexual assault of a minor and endangering the welfare of a child.

Daniel Rente, 44, of North Arlington, NJ was arrested and charged with one count of sexual assault and one count of endangering the welfare of a minor relating to an investigation by the Bergen County Prosecutors Office.

Rente allegedly inappropriately touched a juvenile under the age of sixteen and also exposed himself to the juvenile.

Rente was released and FREE TO GO thanks to NJ Bail Reform after the Arnold Foundation’s “Pretrial Risk Assessment” tool determined he was not a danger to the community or a flight risk and therefore should not be subject to any accountable release – just a “promise” to appear.

DANIEL RENTE OF NORTH ARLINGTON, NJ CHARGED WITH SEXUAL ASSAULT AND ENDANGERING THE WELFARE OF A CHILD

TO: ALL NEWS MEDIA

DANIEL RENTE OF NORTH ARLINGTON, NJ CHARGED WITH SEXUAL ASSAULT ANDENDANGERING THE WELFARE OF A CHILD

Acting Bergen County Prosecutor Dennis Calo announced the arrest of DANIEL A. RENTE (DOB: 04/05/1974; married; and employed as fuel delivery driver) of North Arlington, NJ on charges of Sexual Assault and Endangering the Welfare of a Child. The arrest is the result of an investigation conducted by the Bergen County Prosecutor’s Office under the direction of Chief Robert Anzilotti and the North Arlington Police Department under the direction of Chief Scott Hedenberg.

On Wednesday, January 10, 2018, the North Arlington Police Department received a report that a juvenile under the age of sixteen was inappropriately touched on several occasions by Daniel RENTE. RENTE also exposed himself to the juvenile.

As a result of the investigation by the Bergen County Prosecutor’s Office Special Victims Unit and the North Arlington Police Department, RENTE was arrested on Wednesday, May 23, 2018 in North Arlington and charged with one count of Sexual Assault, N.J.S.A. 2C:14-2b, a crime of the 2nd degree; and one count of Endangering the Welfare of a Child, N.J.S.A. 2C:24-4(a), a crime of the 2nd degree. RENTE is scheduled for a first appearance in Central Judicial Processing Court in Hackensack, New Jersey on Thursday, May 24, 2018 at 1:30 p.m.

Acting Prosecutor Calo states that these charges are merely accusations and that the defendant is presumed innocent unless and until proven guilty beyond a reasonable doubt, and would like to thank the North Arlington Police Department for their assistance in this investigation. 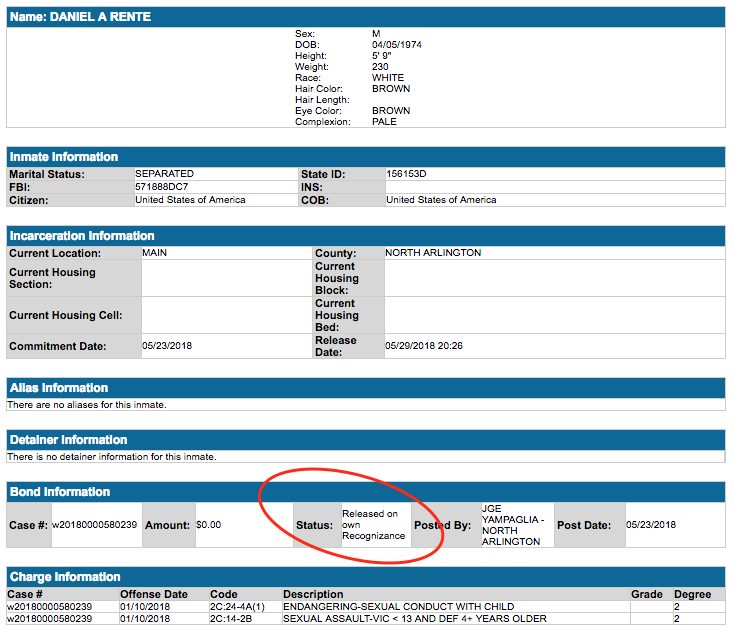